The humanitarian crisis created by Israel’s illegal blockade of the Gaza Strip since 2007 has deprived its Palestinians living there of their to health, safety and well-being, as well as the right to freedom of movement, among other fundamental human rights.

In 2012, the UN warned that Gaza would be unliveable by 2020 if the blockade continued, but in 2017 the UN’s Coordinator for Humanitarian Aid and Development Activities, Robert Piper, revised that projection stating that the unlivability threshold had already been passed. According to findings of a UN trade and development report dated September 12, 2018, “The productive capacity of Gaza has been eviscerated by three major military operations and a crippling air, sea and land blockade.”

“The whole of Gaza’s civilian population is being punished for acts for which they bear no responsibility. The closure therefore constitutes a collective punishment imposed in clear violation of Israel’s obligations under international humanitarian law.” International Committee of the Red Cross in its News Release of June 2010.

The continued collective punishment of the Palestinian people in Gaza deepens the already tragic psycho-social and health situation. “The enduring deprivation of basic economic, social and human rights inflicts a heavy toll on Gaza’s psychological and social fabric, as manifested by the widespread incidence of post-traumatic stress disorder and high suicide rates,” United Nations Conference on Trade and Development.

The Great March Of Return

Compounding this dire situation, since March 2018, the Israeli military has repeatedly attacked people participating in the Great March of Return, exercising their right to protest against the collective punishment of the blockade and demanding their right of return to their homes in historic Palestine. As a result from March 30, 2018 through December 2019: (WHO) 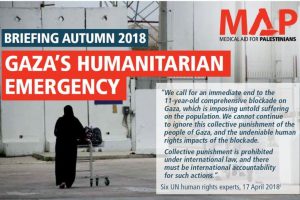 Updated figures on the number of people killed and wounded are available on several sites, including the Palestinian Centre for Human Rights and UN Office for the Coordination of Humanitarian Affairs (OCHA) and World Health Organization.

Other Aspects of the Blockade On Gaza

About fishing in Gaza:

Fishing for Justice: A Fact Sheet About Fishing in the Gaza Strip from Grassroots International.

A Fish Out of Water: Gaza’s First Fisherwoman
Palestinian teenager Madeleine Kolab takes over her father’s fishing business when he’s injured in an Israeli attack (documentary from Al Jazeera).

About the blockade of Gaza and its effects:

Ongoing Gaza Closure: The Impact on Daily Life, a short video (which mentions the fishing sector) from the Palestinian Centre for Human Rights in Gaza:

Gaza in 2020: a Liveable Place? Report from the Office of the United Nations Special Coordinator for the Middle East Peace Process.

From Gisha.org (an Israeli not-for-profit organization, whose goal is to protect the freedom of movement of Palestinians, especially Gaza residents), many publications, updates and other resources, inc. FAQs about the Gaza Electricity Crisis and this March 2020 Factsheet on the Kerem Shalom Crossing.

Gaza Unlocked gives access to first-hand stories from Gaza and information about the blockade.

Palestine VR – glimpse the reality of life in Palestine – hear directly from the people living there, as you embark on tours of six different regions, including Gaza City. See for yourself the daily struggles — but also resilience — of the people in Palestine.

Two short videos based on materials produced by the Union of Agricultural Work Committees in Palestine, shows the experience of Palestinian fishers under blockade, confronted by Israeli warships, sharp restrictions on their areas for fishing, and the political, military and economic blockade of Gaza.

On Israeli theft of Palestinian undersea resources off Gaza

A report from Palestinian human rights organization, Al-Haq :
– New Report, “Annexing Energy” reveals Israel’s systematic and forced closure of Gaza to protect the interests of American and Israeli gas companies
– Annexing Energy – Exploiting and Preventing the Development of Oil and Gas in the O.P.T.

A two-part video report from The Real News Network:

Over 70 years have passed since the Nakba (the Disaster or the Catastrophe) – the forced displacement of the native Palestinian population from what became Israel. The blockade of Gaza and the unliveable conditions suffered by women, children and men is not a natural catastrophe: it must be understood in its political context. The international community is responsible for the refugee situation (see unfulfilled UN Security Council Resolution 194 of 1948); for half a century of military occupation of the West Bank, the Gaza Strip, the Golan Heights and East Jerusalem; and for the gross violations of individual and collective rights of the Palestinian people, perpetrated by the State of Israel.

The worsening situation in Gaza
Israel has maintained an inhumane and destructive blockade of Gaza for over a decade. In 2012 the United Nations predicted that Gaza will become uninhabitable by 2020 because of the Israeli blockade.

Since then the situation has only deteriorated. The Great Return March, which began on March 30 2018, is faced by ruthless Israeli response. UN Office of Coordination of Humanitarian Affairs reported that medical facilities in Gaza, which are already over strained by the longstanding shortages of medical supplies, electricity and fuel, are struggling to cope with the overwhelming number of casualties and that over 20,000 people are still displaced from the 2014 Israeli attacks.
Though 2019 saw an expansion of the fishing limit this UN bulletin highlights the fact that attacks by the occupation navy are still a daily occurrence.